Born With It: Does God Will It?

The epigenome and its mechanisms are another of the thirty–four mysteries of cutting–edge science that are hidden within the books of Scripture. These mysteries are not written in the form of  textbooks, but in the genre of applied sciences. The Bible’s human authors (who are Divinely inspired by the Holy Spirit) wrote about these scientific mysteries thousands of years ago. Scientists, by comparison, are only now beginning to discover them, but only at a rudimentary level. Why did God choose to use applied science as the method by which to reveal them? Simply stated, the knowledge to be gained from reading the Bible is not meant only for the intellectual elite. It is for everyone.
Before we attempt to answer the question posed in this blog’s title, it is essential to talk about the science behind biological change that occurs at the level of genomic function. The level at which the clay of our physiology is moldable (e.g., Job 10:9, Sirach 33:13, and Jer 18:1-10). We must first know a bit about epigenetics and its effect on each phenotype.[1] Ultimately, this blog series aims to address the arguments used by many who are trying to compel us to accept a link between the genetic roots of same–sex attraction and God's will. The argument goes like this: Gayness is entirely a product of our genetic makeup. Therefore, God makes people with same–sex attraction. Therefore, God wills people to be gay. Therefore, same–sex attraction is normal and healthy. Of course, this is a logical fallacy which we will more fully address at another time. Part Three of this blog series will answer the question: does born with it mean that God wills it?
The science we will be discussing is relatively young. Dr. Conrad Waddington only introduced epigenetic–driven modification as a hypothetical in 1942. It wasn’t until around the year 2000 that research became more refined and developed and became more focused.
The word epigenetic translated literally, means above the genome. A more precise definition comes from Dupont et al. He writes, “Over the following years, with the rapid growth of genetics, the meaning of the word [epigenetic] has gradually narrowed. Epigenetics has been defined and today is generally accepted as ‘the study of changes in gene function that are mitotically[2] and/or meiotically[3] heritable and that do not entail a change in the DNA sequence.”[4] To help visualize the epigenome’s role, think in terms of our DNA as being a computer. The genes within the DNA molecule are the hardware of the computer. The epigenome is the software, which tells the computer (the genes) what to do. In our biology, the software (the epigenome) will alter the computer’s function without changing the hardware (the DNA sequencing of the nucleotides, aka the steps of the DNA ladder). The epigenome tells the cells to divide and what types of cells they are to become (e.g., heart cell, muscle cell, neuron, etc.). It’s the epigenome that turns on the genes needed for a particular cell type to function correctly and turns off the unneeded genes (i.e., tells them to stop making proteins).
Since we compare our DNA (and the genes within it) to computer hardware, binary code is an excellent way to understand the epigenetic (software) mechanism. A computer’s software uses bits and bytes to give the computer its marching orders. A bit is a single transistor (aka junction) with two potential states — ON (represented by the number one) or OFF (represented by the number zero). The epigenetic mechanism functions much the same way. Chemical tags called methyl groups (see Figures below), working in conjunction with histones, will turn a gene’s production (expression) of proteins on or off. In laymen’s terms, “on” means the gene sends out instructions to other genes to do something; “off” means it does not.
Initially, it was felt that all epigenetic change resulted, primarily from the diet. Current research shows a much more comprehensive range of environmental and behavioral factors (both sense–able and meta–sense–able) will also epigenetically alter gene function, possibly for several generations, aka transgenerational heredity. 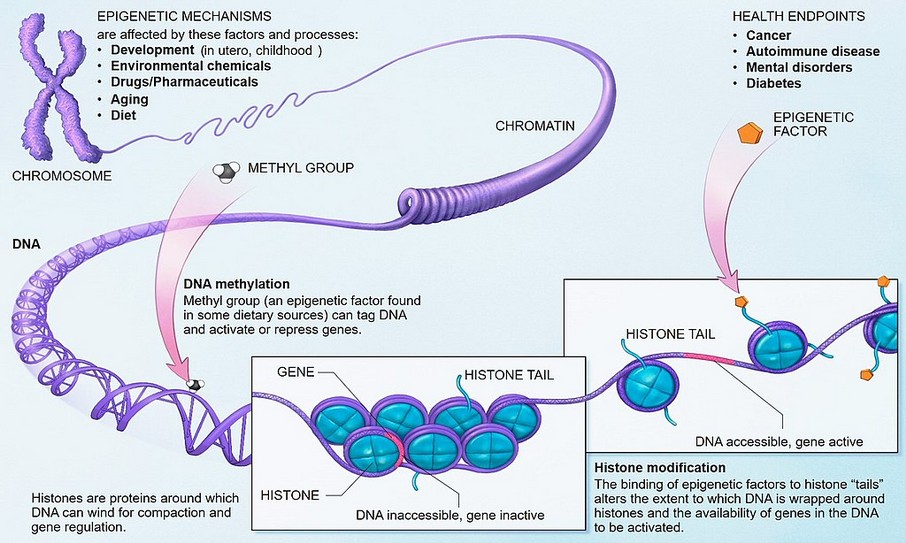 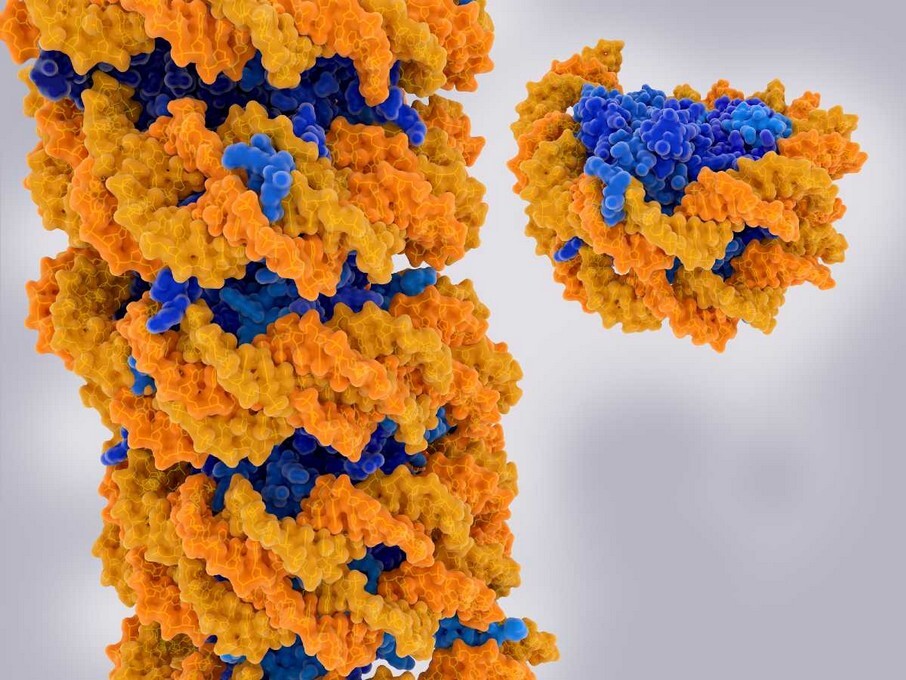 The Epigenetics of Food and Drink

Bible authors (Divinely inspired by the Holy Spirit) were right when they warned us that changes caused by epigenetic methylation could be passed along to succeeding generations — up to the third or fourth generation (Ex 20:5, 34:7; Num. 14:18; Deut. 5:9; as well as Gen 30:25–36, i.e., Jacob’s colored rods). All of the research cited in the previous section, which only represents a small percentage of the available science, strongly supports the statement’s validity: we are what we eat — which would include the Eucharist!

Brief Note About the Eucharist

The Epigenetics of Environmental Factors

Is food the only factor that triggers epigenetic changes? Professor Wolf Reik, Associate Director at the Babraham Institute and Professor of Epigenetics at the University of Cambridge, writes, “It is now well established that epigenetics is the ‘integrator’ between the environment [SML] and the genome [SML].”[17] So let’s look at the consequences of some environmental factors on the salt of our DNA in current and future generations of our children.

The Epigenetics of Substance Abuse and Addiction

Changing the structure, metabolism, and signaling of the neuron could only be accomplished by altering our salt of DNA’s very function — down to the molecular and quantum level. In other words, epigenesis can lead to profound biological changes to the functioning of the body. As seen through our following study, the conclusions reached from this research apply to other types of addictions such as pornography, alcoholism, gambling, smoking, etc.

The Epigenetics of Fear and Stress

They found that all of the genes in question were either over–reactive or under–reactive. “They then fathered young [the second generation from stressed fathers] … [the father] had nothing to do with their upbringing. Their mothers raised the second generation pups with none of the trauma and separation their fathers had suffered. When they grew up, not only did they exhibit the same anxious behavior [as their stressed fathers], but they also had the same signature gene changes. ‘We saw the genetic differences both in the brains of the offspring mice and in the germline – or sperm – of the fathers,’ says Mansuy.”[24] In other words, the children of the children (what would be the third generation) of the original male mice were biologically positioned to inherit the same genetic problems as their grandfather;

Within the scientific literature, it is now well–established that living organisms react sensitively to electromagnetic fields in a range of frequencies and strengths. The human body emits electromagnetic fields in a range of frequencies, including microwave and optical (although too weak to be seen by the naked eye).[30] Even of weak and extremely low frequency, these fields are used by humans on a molecular level for information exchange.[31][32] One example of this comes from a study published in Nature Biotechnology in 2002 and Discovery News in 2011. By simply emitting photons at a particular wavelength, scientists initiated specific genes within yeast cells to produce proteins through epigenetic–driven mechanisms. When they stopped emitting the photons, the protein production stopped.[33][34] These experiments demonstrate that electromagnetic energy (light) triggers epigenetic mechanisms.
Speaking at a webinar, Dr. Carlo Ventura states, “You’re somehow reprogramming … cells backward to [a] certain state in which any kind of decision [leading to cell differentiation] is somehow possible; even the decision to become virtually any kind of cell of the organism. And just think about the tremendous potential of this discovery. This is why the two guys that made this discovery, Shinya Yamanaka and John Gurdon, got the Nobel Prize in medicine for their discovery that even non–stem adult cells can be epigenetically reprogrammed [all emphasis SML] backward to a state where they can eventually give rise to neural cell, cardiac cells, skeletal muscle cells, or insulin–producing cells. So this is really relevant, a step forward in science. … Another issue that makes the role of physical energy and the environment even more consistent … [is] the potential of affecting cell reprogramming and epigenetics [through] vibration, the acoustic vibration, the sound vibration.”[35]
Part Two of this blog series can be found here: https://www.stossbooks.com/blog/index.php?born-with-it--does-god-will-it--part-2-of-3
Part Three: https://stossbooks.com/blog/index.php?id=000000047
For a list of all blogs and articles, go here: https://www.stossbooks.com/index.php
Updated 05/24/2021

[35] Dr. Ventura’ findings (upon which this webinar was based) were published in Federation of American Societies for Experimental Biology (FASEB) Journal in 2004 and 2005. Ventura, “DNA and Cell Reprogramming Via Epigenetic Information Delivered By Magnetic Fields, Sound Vibration and Coherent Water,” Webinar transcript available here: https://www.scribd.com/document/161598761/Dna-and-Cell-Reprogramming-Transcript.

Dr. Ventura’s brief biography: Prof. Carlo Ventura, is MD, Cardiologist, and Ph.D. in Biochemistry. He was Researcher at the “Laboratory of Cardiovascular Science”, N.I.A./N.I.H., Baltimore, MD, U.S.A. from 1988 to 1992, and then for repeated periods until 1994. He is Full Professor of Molecular Biology at the School of Medicine of the University of Bologna, Italy, and Chief of the National Laboratory of Molecular Biology and Stem Cell Engineering of the National Institute of Biostructures and Biosystems (NIBB – INBB) – ELDOR LAB, at the Innovation Accelerators of CNR (National Research Council), in Bologna. Carlo Ventura is member of the American Society of Biochemistry and Molecular Biology (ASBMB), and of the Cell Transplant Society. He discovered nuclear endorphin receptors and small peptide signaling responsible for cardiogenesis in mouse embryonic stem cells, paving the way to the new field of “intracrine” regulation of cell biology.

He developed new molecules harboring differentiating and paracrine logics for cardiovascular regeneration. He found that “extremely–low frequency” and asymmetrically–conveyed radioelectric fields were able to enhance stem cell expression of pluripotency, and afford a direct reprogramming of human skin fibroblasts towards myocardial, neuronal and skeletal muscle lineages. He has also discovered that cells are sensitive to acoustic vibrations and patented the cell ability to express “vibrational” signatures of their health and differentiating potential. These findings opened a new perspective based upon the use of physical energy in stem cell science. He published more than 150 full papers in the top journals of cellular and molecular biology.